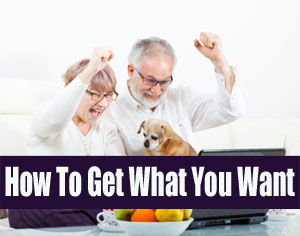 How To Get What You Want from Life: Free Success Map

Thoreau said, “The mass of men lead lives of quiet desperation. What is called resignation is confirmed desperation.” I get depressed just reading that. Worse still is that it’s true. So many people trudge through life doing a job they hate, just trying to get through the day so they can get up the next morning and do it again. The only excitement comes from watching music contests on TV or immature rich people brawl in reality TV.

As a social worker, I used to work with parents on disciplining their children. For some reason, many of them seemed to think there were only two ways to discipline kids; spanking and time out. Because they couldn’t get time out to work, they resorted to spanking, even though it didn’t work either, but it was fast and easy. The truth is, there are many ways to teach kids correct behavior, personal responsibility and respect. I think many people view life in the same way. They think they’re are only two options; what they’ve got now and pie-in-sky dreams, but because they can’t get their dreams, they stick with their current life, even though it doesn’t really work. But, just like with discipline, there are many ways to improve the life you have. Here are my tips for creating a better future:

1) Success is a journey. In all the years I’ve been doing Work-At-Home Success, I’ve met a lot of people who want to work at home. Many stay in touch with me and most aren’t working at home. Why? Because they want to take one action and have success drop in their laps. In any endeavor, whether it’s working at home, paying off debt, losing weight… it won’t happen tomorrow. Instead it comes from regular, consistent, effective action. If you’re not doing the right things everyday to achieve your goal, you won’t achieve your dream. The longer you put off doing the right tasks or if you’re haphazard about doing the right activities, the longer it will take.

2) Success is attainable. In the last tip I said that success takes regular action. But that doesn’t mean it’s a linear trip. Obstacles, hardships and setbacks are part of the journey. Too many people see these troubles as stop signs and give up on their goal. They’ll say the economy is bad, their children are young, they’re too old… etc. But these are excuses. For every reason you give me that you’re not achieving success, I’ll give you the example of someone who had that same excuse or worse, and yet achieved their dreams. Many people have sick children, are being foreclosed on and other hardships and yet they forged ahead and got what they wanted. I figure if Helen Keller can go to college and become a public speaker even though she was deaf, dumb and blind, I can do just about anything.

3) Success is in the small things. I think one reason that people get discouraged is that they don’t feel accomplished until they attain the big prize. But as I’ve mentioned, success is a journey. It’s achieved through the achievement of a bunch of smaller steps. You need to acknowledged and celebrate those small steps. When I was working on getting published, my big goal was to have a published book. But I didn’t celebrate only when the book came out. I celebrated when an agent asked to read my book proposal. I did a dance when an agent said she wanted to represent me. And I jumped up and down when she sold the book to a publisher. Success is built brick by brick. Each brick does it’s part so it should be acknowledged.

4) Success is an attitude. I believe challenges and hardships are a requirement to achieve to success. Success is about achievement, accomplishment, hard work. We don’t view the kids of rich parents as successes. Being born rich or handed the good life isn’t success. Instead, the people we hold up as the greatest successes often had the biggest hurdles to get over. What kept them striving toward their goal when life seemed to be getting in the way? Attitude. They viewed the challenge as a learning experience. They got mad, and pushed harder. What they didn’t do was feel defeated. Attitude, along with desire, is the fuel that keeps you moving toward your goal.

5) Success isn’t a solo-venture. I watched The Monuments Men last night. In one scene, the men found a huge stash of art that had been stolen and hidden by German Nazis during WWII. For the most part, no one cared until they also found piles of gold. In the next scene, the great American generals were sitting by the gold doing a press conference. The generals didn’t find the gold, but they took credit for it. While great ventures need a leader, they aren’t a success by the actions of one person alone. I work at home all day by myself, but I know that my success isn’t mine alone. I have family that supports me. I have mentors and coaches that teach and guide me. I have virtual support people who help with a host of tasks that I need completed. I have guests who write for the site or share their stories on the podcast.