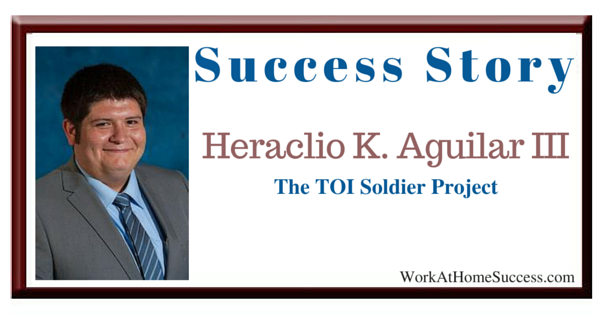 This week’s Work-At-Home Success story comes from Heraclio K. Aguilar III of The TOI Soldier Project an alternate universe designed to give combat veterans a safe place to share their combat experience anonymously through a graphic novel of their own. He also conducts art therapy courses at Homeless Veteran Shelters in Los Angeles with a coloring book series that is based off of their graphic novels, which allow clients to become more interactive and insert their own tales. He came up with this idea from his own experience as a combat veteran who has suffered from PTSD and found art therapeutic. He initially designed his story to share it with his family members, but it evolved into something that could be used as a therapeutic tool. Now with their first series, The Tale Before Time, the universe of The TOI Soldier Project is introduced to the world.

1) How did you get started working from home?

After the Army I worked anywhere from retail to warehouse as I went back to school, but my PTSD symptoms prevented me from fully reintegrated back into my civilian role. I eventually reevaluated my situation and decided my problem was not the work, it was the people that I work for. I work hard for the money I receive, but there is somebody that profits more off of the work that I do and that I did not support, so I decided to do something about it. I moved to Los Angeles where I received the help that I needed as I continued receiving the education that I needed to go into business for myself. During the time I lived in a homeless veteran shelter I thought of The TOI Soldier Project as a way to tell my war stories, but I did not know how to draw really well. After receiving a few Business and Graphic Design degrees I finally had what it takes to start a company of my own. To do that it took a lot of my own time so I devoted it all to the development of my business that I run out of my home.

2) How did you choose the work-at-home career you do?

For what I do it is really the best and cost efficient way to conduct work, I am a business to business with a little missionary work. I create the product and outsource the material for digital and physical distribution so realistically it takes a few high tech computers to perform the bulk of my occupation.

3) How did you get started (basic initial steps)?

After I received my education I create a business plan which helped me receive the money that I needed to get the ball rolling in order to start creating a prototype.

4)  How did you get your first client or customer or job?

My first client was myself, I created an ‘alien avatar’ that allowed me to share my real war stories and I noticed the positive change in my attitude as did others. I knew where I received my therapeutic benefits from so I began working on The TOI Soldier Project’s development.

5) How do you market your business?

I mostly market myself through social media and participating in challenges, for example we are participating in a comics challenge by Stan Lee. We hope to win but the benefit is the attention that we receive during the competition, it is up to each business to promote their selves.

My day starts early so I can walk the Baldwin Hills before I start creating posts and generating concept art for my illustrator. I set apart some time each day to work on a script that will later be created into a comic book, I review the material many times and then start creating them.

7) What do you know now that you wish you knew when you started?

8) What advice would you give someone who wants to work from home?

The Tale Before Time Part 1 on Amazon

How Working From Home Can Help Your Future, And The Earth’s!