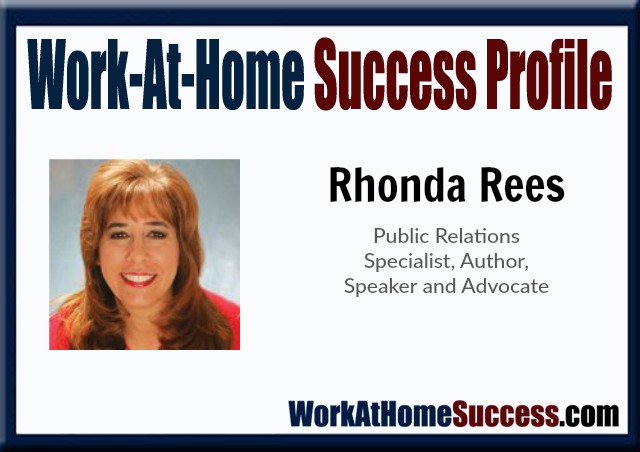 Work-At-Home Success: How Rhonda Rees Created Her Own Success Story

Rhonda Rees is an award-winning veteran in the field of public relations. She is an independent in charge of Rhonda Rees Public Relations Company, and Aseity Press publishing.  Rhonda is the author of an award-winning book, Profit and Prosper with Public Relations®:  Insider Secrets to Make You a Success, and is also the recipient of the Publicist of the Year honor from the prestigious Bulldog Reporter publication, for a media awareness campaign she orchestrated to help bring attention to online book piracy.  In addition, she is a past IRWIN (Industry Recognition for Writers in the News) award-winner, Publicist of the Year from the Book Publicists of Southern California organization.  In 2017, Rhonda is featured in the Elite Entrepreneurs book.

In her varied career, Rhonda has represented a wide variety of clients including authors, celebrities, Fortune 500 companies, manufacturers, fire and safety firms, environmental companies, attorneys, politicians, financial planners, and nonprofits. She has been instrumental in creating both traditional and grassroots PR campaigns that have garnered extensive media coverage in newspapers, magazines, radio, television and online, through traditional and social media placements. In addition, Rhonda has lectured extensively on the subject of public relations to businesses, universities, and organizations. She has also appeared as a guest on radio podcasts, and on television programs and news broadcasts, including National Public Radio, and on YouTube.  In addition, she has contributed many feature articles in magazines, and online.  In 2016, Rhonda joined the Independent Book Publishers Association (IBPA), and gave a webinar on the topic of Online Book Piracy awareness.  She also orchestrated the annual “Check Your Books” PSA awareness campaign.

How did you get started working from Home?

Prior to my going out on my own, I had worked 10 years at a small PR agency.  I had learned so much from my accomplished boss, the late Alfred E. F. Stern.  He was the chapter President at that time of the Public Relations Society of America.  I had also worn so many different hats on the job, that by the end of my time over there, I knew enough to start my own business — and that’s just what I did.

How did you chose the work-at-home career that you do?

Since I was an experienced public relations person, this was something that was always in the back of my mind, and I took an extension class in order to learn about running a home-based business.  At the time I had enrolled, working at home was not a popular or common option.  This was before we had the breakthroughs in technology, social media and the Internet.  I always thought that by working at home, I could be freed up to do other things, and also maintain my own hours, so I could best fit in what I needed to attend to.

How did you get started?

The timing worked in my favor.  My boss decided to retire, and when he did, that freed me up to begin my own home-based PR business.  Also, the economy was in the midst of a recession, and it was difficult to land full or part-time work.  Luckily, I also had equipment at home, computer, photo copy machine, fax, etc., so that was also a plus.  I had volunteered my time and was a past President of the former Publicity Club of Los Angeles.  That organization gave me good referrals.  I began working slowly with new clients from there.

How did you get your first client or customer or job?

While I had been working at the PR agency for 10 years, I had developed a lot of our new business.  I did cold-calling, visited trade shows, and also got clients through word-of-mouth.  I also advertised to be a guest speaker in a publication that went out to lots of groups and organizations such as chambers of commerce, rotary and Lions clubs, etc.

How do you market your business?

By having a background in both PR and marketing, I was able to use these skills to better market my business.  Cold-calling, email blasts, sending out press releases, word-of-mouth, giving speeches, volunteering my time on organization boards, etc.,  I also make use of social media, and contribute feature articles, appear on TV and radio.  In addition. I’ve written an award-winning book, Profit and Prosper with Public Relations:  Insider Secrets to Make You a Success.  I have been featured in  the newly released amazon best-seller book, Elite Entrepreneurs.  I further enter professional awards contests, and I was named the Publicist of the Year by the prestigious Bulldog Reporter publication.  In addition, I won an IRWIN (Industry Recognition for Writers in the News) award Publicist of the Year by the Book Publicists of Southern California organization.

My work day is pretty much 9-5.  Occasionally I find myself working into the evenings and on weekends.  This is especially true if I am helping out with a special event, or if I am on an immediate deadline.  I generally check my emails first thing, I also take care of social media posts, and go from there.  Sometimes I am on the phone, or writing press releases or articles, etc.  Each day is different, no two days are ever the same.

What do you know now that you wish you knew when you started?

Namely that recessions can last a whole lot longer than ever anticipated or expected.  It’s very important to never rest on your laurels — in other words it’s always a good idea to work on getting business even when you are busy and thriving.  I also believe that it’s a smart idea to go after clients in a variety of fields. This also helps to keep things more “recession” proof.  Always be aware of that rainy day.

What advice would you give someone who wants to work from home?

It’s important to know if you are the type of person that can turn off your “home life” from your “work life”.  This is very true when you are doing the hands-on business.  You have to know if you’ll be easily distracted or not. Since I had trained many years in a small work environment, I already knew that I could easily translate what I did on the job to working from home — and so far it has been a success.

Award-winning Book Profit and Prosper with Public Relations:  Insider Secrets to Make You a Success

Tell Us What WAH Info You Need

Francesca Montillo Cooked Up a Work At Home Career

Tiffany Murphy is an Unexpected Work At Home Mom Entrepreneur