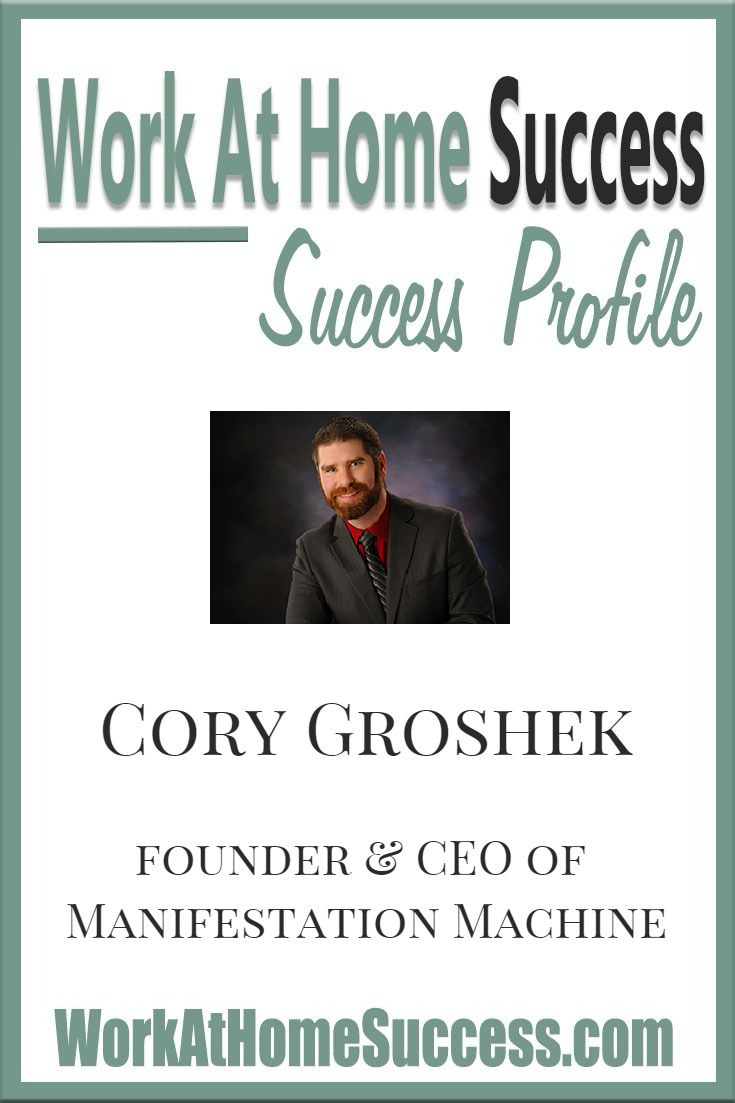 Work-At-Home Success Profile: How Cory Groshek Manifested His Own Destiny

Cory Groshek is an author/blogger, investor, musician/entertainer, consumer rights advocate, metaphysician, and founder/CEO of Manifestation Machine. He is also known in the music industry as Cory Crush and considered an expert on intermittent fasting in the YouTube fitness community as Low Carb Cory. His debut book, ‘Breaking Away: Book One of the Rabylon Series’ was published via Manifestation Machine Books in December of 2016 and is now available as a Kindle e-book, Audible audio book, and in paperback.

1) How did you get started working from home?

I truly began working from home at the end of February of 2016, when I quit the last “full-time” job I had at a customer service call center after having earned nearly three quarters of a million dollars through private legal settlements in the previous 18 months. It was far more than what I’d been used to earning, which was somewhere around only $24-30,000 a year ever since I’d graduated from Mid-State Technical College with a degree in Marketing in 2003. After earning that much money in such a short period of time, I was able to dedicate myself fully to working on my debut children’s book, Breaking Away: Book One of the Rabylon Series and building my personal growth and development brand, Manifestation Machine, and its associated website, ManifestationMachine.com.

2) How did you choose the work-at-home career you do?

My life’s mission has always been to help others, or to make this world a better place in some way or another. After having had some mild success in doing so through a YouTube fitness channel, under the alias “Low Carb Cory”, whereby I taught people all around the world the benefits of intermittent fasting for fat loss, body detoxification, etc., I decided I wanted to go in a different direction, “broaden my entrepreneurial horizons”, so to say, and reach a much wider (and younger) range of people. That decision ultimately led me to start work on my debut children’s book and my Manifestation Machine brand, through which I intend to teach everyone and anyone with “ears to hear” how they, too, like me, can create their own reality and what I like to call “a life worth dying for”.

3) How did you get started (basic initial steps)?

The first thing I did was make sure my finances were in order, meaning I had to make sure that I didn’t blow all of the nearly three quarters of a million dollars I’d earned through settlements on anything I either didn’t really need or that wouldn’t serve an explicit purpose for me. To accomplish this, I immediately hired a tax professional to help me make sure I was setting aside enough of the money for taxes, paying my quarterly taxes on time, and, of course, taking all of the tax deductions and/or write-offs that I and my fellow entrepreneurs are legally allowed to take as the owners of our own businesses. Once I’d taken care of all of that, I was able to focus on the first steps to really getting my business set up, which involved getting my home office set up, the necessary office supplies and equipment purchased, my book written, and my website up and running.

4) How did you get your first client or customer or job?

I got my first couple book sales as a result of a combination of word of mouth, giveaways of the e-book version of my book through Amazon’s KDP Select program, and advertising on social media, with most of my advertising budget going into Facebook. After my first couple hundred dollars or so in sales, however, I decided to do more “guerilla marketing” of the paperback version of my book and have thus been doing a lot of charity work (visiting domestic abuse shelters, volunteering at local book sales and drives, and dropping off free copies of my book in Little Free Libraries all over the State of Wisconsin), because I don’t just want to sell books; I want to get my books into the hands of the people they were intended for and who, not coincidentally, need them the most, our children.

5) How do you market your business?

Well, as mentioned earlier, I don’t just do “traditional” marketing via social media such as Facebook or depend upon my friends and family to tell others about my book; I go out of my way to do a lot of “outside the box” things, like giving away free copies of my books to local charity book drives, such as the bi-annual Big Book Sale at the Central Library in downtown Green Bay, Wisconsin and Little Free Libraries all over the State. I do these things primarily because I see no one else doing them. I remember hearing once that “If you do what everyone else does, you’ll get what everyone else has got,” and you know what? I don’t want what everyone else has got, because “everyone else”, as far as I can see—and by the way, I know I’m generalizing here–doesn’t even have $500 saved for an emergency, let alone capital or free cash flow they can dedicate to starting or operating their own business. I want more than that and I need more than that, if I’m to have the enormous impact that I intend to have on this world before I die, and so, for that reason, I don’t do what the “Average Joe” or the “Average Jill” writing children’s books down the street does, because people like me, with dreams as big as the kind I’ve got, can’t afford to be “Average”.

Every morning when I wake up, the first thing I do is feed and water my cats, brush my teeth, and get in a nice, long walk around my neighborhood, making sure to stop by a Little Free Library at John Muir Park to see if anyone took the last copy of my book I put in there. If they did, I make a note to come back later that afternoon to replace it. After I get home from my walk, I typically check my e-mail quickly, make a to-do list for the day to help me stay organized, and write a new blog post and/or post something helpful or interesting for my readers and followers on all of my social media profiles, which include Facebook, Twitter, Instagram, Google+, and LinkedIn right now. Once that’s done, I usually have lunch and then either take care of some errands I need to take care of and/or sit down to officially post my blog post, or, if I’m not ready to post it just yet, work on something else, such as the next book I’m working on, which is a self-help-style book for adults, or I get caught up on reading some of the books or helpful blog posts I’ve found over the last couple months, which are usually related to writing, marketing, search engine optimization, or any number of subjects that relate to what I do every day. After that, I’ll usually relax my watching an episode or two of The Profit (which is an amazing show, by the way, that I highly recommend all entrepreneurs “binge watch”) before settling in for bed, so I can get up the next day and do it all over again!

7) What do you know now that you wish you knew when you started?

I wish I would have known how guilty it would make me feel, after having spent the last decade stuck in dead-end, customer service call center jobs, to be home most of the day, every day, with complete freedom to come and go as I please, knowing that the average American, who I very much sympathize with and root for, does not have that luxury. I wish I would have known how to handle that guilt better, because when I initially started working from home, it was tough for me to feel like the book-writing and the blog-writing I was doing, or the dropping-off-of-my-books-at-Little-Free-Libraries I was doing, was actually work, and for the longest time I struggled with the feeling that I was somehow a “bad” person because I wasn’t “down in the trenches” and “getting dirty” with my former call center co-workers, shackled to a cubicle for eight hours a day. Eventually, I got over my false sense of guilt and became very proud of everything I’ve accomplished to get to the point where I’m as free as I am, but it was definitely not easy to get there.

8) What advice would you give someone who wants to work from home?

I would tell them to do something that most Americans have not done, which is get their finances in order, as in, save up at least enough money to live for in the event of the worst-case scenario, such as every able-bodied person in your family losing their jobs or their sources of income, because they need at least that much money to comfortably work from home, so they’re not constantly looking over their shoulders, worrying about whether the next electric or water bill will get paid or not. Furthermore, I would tell them to do what I did and hire a tax professional as soon as possible, because not paying the taxes you owe or not taking all the deductions they’re entitled to take as an entrepreneurs, sole proprietors, etc. are two of the worst mistakes anyone could make, regardless of whether they work from home or out of an office somewhere.

Work-At-Home Success Experts: How to Tackle Obstacles On Your Way To Working From Home

Francesca Montillo Cooked Up a Work At Home Career

Tiffany Murphy is an Unexpected Work At Home Mom Entrepreneur